Sabbaths and Holy Days are interchangeable concepts. Puritans understood the Christian Sabbath largely as a continuation of the OT Mosaic code translated to Sunday observance.  Anglicans took a more nuanced view, retaining the general idea of “rest” but putting aside the ceremonial strictness of the OT. Such a treatment of Sabbath-keeping gave Anglicans leeway to establish other holy days aside from fixed Sundays, revealing a pastoral sensitivity toward Sabbath-keeping as well keeping the proper division of ecclesiastical vs. divine law. END_OF_DOCUMENT_TOKEN_TO_BE_REPLACED

The 1571 canon is frequently quoted without reference to the context of the Book of Discipline wherein it’s found. Introduced by Parker, and perhaps inscribed by Elizabeth herself, the canons passed the southern convocation of Canterbury and the Bishops of York added their signatures. However, it never gained ratification  from the Queen, or the entire realm, who preferred leaving normal church matters to the Archbishops. Consequently, the legal history of the canon is similar to the Book of Advertisements; mostly, they are diocesan and regional Articles, adopted by Canterbury and London with less impact elsewhere. But the canons provide the earliest terms of subscription prior to Whitgift’s three-articles.

END_OF_DOCUMENT_TOKEN_TO_BE_REPLACED

In Principles of Religious Ceremonial, the Rt. Rev. Walter H. Frere outlines several maxims regarding the application of right ritual. The Principles of Religious Ceremonial is actually an English Use manual for worship much like Dearmer’s Parson’s Guide. It is largely a study on Sarum ritual as well as the Ornaments Rubric, but  it is also a criticism of anglo-papism. Frere’s work might be viewed as a reigning in of advance ritualism rather than a further extension of catholic revival. Regarding the treatment of Principles for greater ceremonial restraint, Frere comments on Anglo-catholic practices:

“At the present moment we are in the midst of a period of experiment and expansion. The result of all this is a great diversity in matters of ceremonial.  There are signs, however, that the limits of this diversity have been reached; and there are hopes that the moment is coming for the attainment of a far greater measure of unity than has been possible at least during the last fifty years. If this is to be the case, the unity can only be secured through a testing of the customs in use by the standard of ceremonial principles.” (Principles, p. 140)

END_OF_DOCUMENT_TOKEN_TO_BE_REPLACED

This essay was originally written for River Thames (along with Supremacy in the Offices) and, while I normally do not cross-post, this entry is part of a longer series discussing authority in a church where the Crown is absent.  It forms a whole together with Reversing Desuetude and Fighting Bishops.

The faldstool in English ceremony was the movable seat otherwise reserved in the chancel as the chair for the visiting Bishop. From the faldstool, an Ordinary passed authority by laying on hands of both confirmed laity and clergy. But the faldstool also doubled as a prayer desk upon pentitential occasions where the bishop rested his arms upon the faldstool’s cushion while kneeling before it. The idea of the bishop’s faldstool representing a throne of authority in the church is embedded the BCP’s litany. From it we learn the peculiar order of authority within the Church of England. END_OF_DOCUMENT_TOKEN_TO_BE_REPLACED

The Christian Institution of Man, published in 1537 by His Majesty, King Henry VIII, is a fantastic read. The chapter on “the Sacrament of Orders” is highly recommended, offering a gem on the lawful powers of bishopric– amongst which is found the moderate application of church discipline, historic creation of minor orders, and the use of OT temple ordinances as a model for NT canon law. But especially noteworthy is the larger treatment on the usurpation of Rome against temporal Princes, and how the Pope’s  claim to universal power departed from the original limits and nature of the Bishopric itself.   The bishopric’s liberties have been treated in an earlier essay, Reversing Desuestude.  What follows here is a continuation of Bishop’s right to decide common order in the church.

END_OF_DOCUMENT_TOKEN_TO_BE_REPLACED

Whenever deviancies from 39 Articles or Prayer Book are pressed, “desuetude” is plea invoked by liberal catholics to justify breaches against royal and ecclesiastical authority known during the Settlement, 1536-1662. In the past year, this argument has been heard from several quarters, and, whether TEC or ACC, it amounts to the same–i.e., the Settlement represents nothing binding.

Often those who appeal to ‘desuetude’ aren’t terribly specific about which ceremonies or doctrines have fallen to the wayside. Thus, the appeal to desuetude can generate substantial ambiguity. Last year, the term was used by Archbishop Haverland to beg the English Mass as celebrated in 1543 without answering questions on the theology pertaining to current Missal-use. More recently, the Reverend Fr. Wells propounded desuetude with respect to the 39 Articles, saying, “for the sake of the argument, I will yield the point and concede that the Articles are legally a dead issue among us, their canonical authority having fallen into desuetude.”

END_OF_DOCUMENT_TOKEN_TO_BE_REPLACED

Thus far Anglican Rose has assumed the English Church a template for the American, but we have yet to consider how far England’s example reaches. The Preface to the American Prayer Book says when the books of each church are compared, ” it will also appear that this Church is far from intending to depart from the Church of England in any essential point of doctrine, discipline, or worship; or further than local circumstance require.” The ‘local circumstance’ clause is often understood as alterations in the prayer book by consequence of the Revolution, namely the amending or omission of certain state prayers. But the Preface seems to indicate further possible changes according to “the exigency of times and occasions”, and this leaves quite a large door open.

END_OF_DOCUMENT_TOKEN_TO_BE_REPLACED 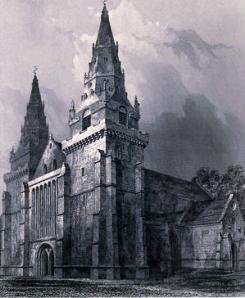 Over the last couple weeks Anglican and Presbyterian doctrine have been on my mind. While the differences between Presbyterian and Anglican faith sparked the Great Rebellion, these two churches nonetheless share a common interest for establishment under the same Crown, and, when squared against Independents like Cromwell and fifth monarchists, Presbyterians finally joined ranks with Anglicans to ensure the continuation of a national church in both Scotland and England by the restoration of Charles II (sic.,  treaty of Breda). Therefore lines of fraternity can be surprising. Nevertheless, the WCF stems from a family of Swiss confessions proven generally impatient of the 39 Articles and oftentimes hostile to the BCP.   If certain differences in ‘faith and order’ can ever be bridged, two reforms would be considered: 1) the historical complaints lodged by  Presbyterians against the English BCP; 2) the reforms proposed by the 1616 Aberdeen Assembly as a starting point for any principled engagement.
END_OF_DOCUMENT_TOKEN_TO_BE_REPLACED

The Ornament’s Rubric refers to worship per the second year of Edward VI. Yet the 1549 Prayer Book only specifies particular vestments at the Lord’s Supper and Holy Communion. How then do we know Edwardian ceremonial decking? Article XXXIV tells us that the Traditions and Ceremonies of the Church, which be not repugnant to the Word of God, are determined by common order. Nicholas Ridley called those rites governed by canon ‘vera-adiaphora‘. Therefore, the canon belonging to the late Henrician and early Edwardian periods define ornaments and much lawful ceremony. This canon includes the injunctions and visitations of 1536, 1538, 1547, and 1548.

END_OF_DOCUMENT_TOKEN_TO_BE_REPLACED

The Perth Assembly debates between 1618-1619 provide good opportunity for apprehending Anglican adiaphora and the general purposes of church canon. The assembly and conferences were summoned by King James to lay the ground work for greater Scottish discpline. An episcopacy had already been re-established in 1606, and James I wanted better conformity between the Scottish Kirk– still mostly regulativist in ceremony– and English ritual. END_OF_DOCUMENT_TOKEN_TO_BE_REPLACED

In the mid-1560’s, episcopal visitations tried to slow iconoclasm in the churches. The 1566 Advertisements give example, inquiring into the placement of communion tables, forbidding baptismal fonts relocation from  ‘ancient usual places’, mandating kneeling at communion, and minimally wearing a surplice rather than academic gown. By King James’ reign these injunctions tightened, and a campaign to ‘dignify’ externals in worship was launched by Bishops Bancroft, Andrewes, Neile, Laud, Montagu, and Cosin. Beautification might include carpeting chancels, installing organs, purchasing table frontals,  or embroidering priestly vestments. It also included bodily reverences during the liturgy, such as bowing upon the Name or toward the Altar. Therefore, an iconodulism antithetical to puritan sensibilities was present within these reforms. END_OF_DOCUMENT_TOKEN_TO_BE_REPLACED