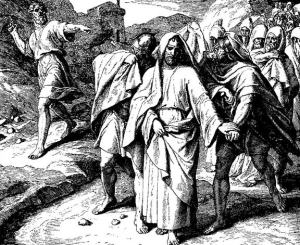 Matthew 15 has been a proof text used by iconoclasts to purge public worship of man-made ceremony and custom. Surprisingly, even Weslyan Methodists, who ought to known better by their 25 Articles, commended plain worship by this same verse, overturning ceremonies otherwise understood by Anglicans as  ‘laudable’ or ‘indifferent’. When iconoclasts believe ‘man-made worship’ is forbidden by the  second commandment rather than whether they server edification or “good order”, puritans loose touch with the older protestant idea of adiaphora, “It is not necessary that Traditions and Ceremonies be in all places one, or utterly like; for at all times they have been divers, and may be changed according to the diversity of countries, times, and men’s manners, so that nothing be ordained against God’s Word” (Article 34). Nor are puritans especially consistent when the prior biblical imperative is used .

In the Homily on Good Works (book 1, part 3), Cranmer clarifies the difference between men’s idolatrous ceremonies and those belonging to good order. The homily is worth reading for puritans who believe Matthew 15 necessitates the elimination of all human tradition.

“And though Christ said, They worship God in vain that teach doctrines of men; yet he meant not thereby to overthrow all men’s commandments;– for he himself was ever obedient to the Princes and their laws, made for good order and governance of the people;– but he reproved the laws and traditions made by the Scribes and Pharisees; which were not made only for good order of the people, as the civil laws were; but they were set up so high, that they were made to be a right and pure worshipping of God as they had been equal with God’s laws, or above them: for many of God’s laws could not be kept, but were fain to give place unto them. This arrogance God detested, that man should so advance his laws, to make them equal with God’s laws–  wherein the true honouring and right worshipping of God standeth– and to make his laws for them to be left off. God hath appointed his laws; whereby his pleasure is to be honored. His pleasure is also, that all man’s laws, not being contrary to his laws, shall be obeyed and kept, as good and necessary for every commonweal; but not as things wherein principally his honor resteth. And all civil and man’s laws either be, or should be made, to bring men the better to keep God’s laws; that consequently, or following, God should be the better honoured by them. Howbeit, the Scribes and Pharisees were not content that their laws should be no higher esteemed than other positive and civil laws; nor would they have them called by the name of other temporal laws; but called them holy an godly traditions, and would have them esteemed, not only for a right and true worshipping of God– as God’s laws be indeed– but also for the most high honouring of God, to which the commandments  of God should give place. And for this cause did Christ so vehemently speak against them; saying Your traditions which esteem so high, be abomination before God. For, commonly, of such traditions followeth the transgression or breaking of God’s commandments, and a more devotion in keeping of such things, and a greater conscience in breaking of them, than of the commandments of God. ” (Book of Homilies, 35-36)

Though Cranmer is speaking about civil law, the context of the 16th century was the secular power had vested rights in the church, and while the civil authority could neither alter doctrine or change sacraments, it did regulate church order which implicated adiaphora and external canon.  So when Cranmer speaks of Christ obeying the secular authority, in Cranmer’s Erastian context, both civil and ecclesiastical law are suggested.  Cranmer reminds us the problem with man-made worship is not the author, but its use. Customs and ceremonies become idolatrous when they are too highly regarded, i.e.,  supplanting, contradicting, or given greater authority than God’s holy commands. Cranmer goes on to say the error of the day (sic., Rome) was much like the Jews, where man-made rites were placed above or equal to those which the Lord instituted.

“and how they did set up their own traditions as high or above God’s commandments; which hath happened also in our times– the more to be lamented– no less than it did among the Jews; and that by the corruption, or at lest by the negligence, of them that chiefly ought to have preferred God’s commandments, and to have preserved the pure and heavenly doctrine left by Christ” (p. 37)

Perhaps merit theology naturally breeds a misuse of rites, creating a context where good works or ritual devotion justify grace? Nonetheless, by adding man-made rites for the remission of sin, Rome was peddling idolatry.  A multitude artifacts and ceremony had been added to those simple and few sacraments instituted by Christ, either obscuring if not replacing God’s glory. Cranmer described the problem:

“And briefly to pass over the ungodly an counterfeit religion, let us rehearse some other kinds of Papistical superstitions and abuses, as of Beads, of Lady Psalters, and Rosaries of fifteen Oes, of St. Bernard Verses, of St. Agathe’s Letters, of purgatory, of masses satisfactory; of stations and jubilees, of feigned relics, of hallowed beads bells, bread, water, poalms, candles, fire, and such other; of superstitious fastings, of fraternities or brotherhoods, of pardons, with such like merchandise; which were so esteemed and abused to the great prejudice of God’s glory and commandments, that they were made most high and most holy things, whereby to attain to the everlasting life, or remission of sin. Yea also vain inventions, unfruitful ceremonies, and ungodly laws, decrees, and councils of Rome were in such wise advanced, that nothing was thought comparable in authority, wisdom, learning, and godliness, unto them, so that the laws of Rome, as they said, were to be received of all men as the four Evangelists; to the which all laws of Princes must give place:  and the laws of God also partly were left off, and less esteemed, that the said laws, decrees, and councils, with their traditions and ceremonies, might be more duly kept, and had in greater reverence.”

Every once in a while Anglicans will ask what is the fundamental or driving idea behind the the English Reformation?  Some have said sola scriptura, others the king’s supremacy, and for some it’s five centuries of primitive doctrine. Surely all these are worthwhile candidates. But if distinguished from both Rome and Geneva, Anglicans differed by the manner they understood the ordering of public worship. Rome and Geneva had made their peculiar form of worship immutable by ‘divine right’ arguments. In the case of Geneva, worship was ordered by the necessary consequence of God’s Word (RPW). In the case of Rome, the forms of worship was commanded by Holy Tradition which was likewise equal to God’s Word. An equal insistence regarding the particular form of worship as divine was behind both, the transgression of which was morally offensive.

Anglicans have approached the question of worship from a more cautious angle, categorizing church rites into different sorts of laws– some admittedly mixed, others positive, and some indeed commanded by Christ. But pure Calvinism and Romanism make no such distinctions. It’s for this reason (in the author’s opinion) ecumenical talks with either RC’s or Reformed flop (be it Ratisbon 1541 or Savoy 1661). Neither side understood adiaphora, and, thus, when dealing with one error, a person really struggles with both, i.e.,”Romano-Puritanism”.  Cranmer nicely sums the predicament of Holy Tradition/Regulativism:

Indeed, “scant well-learned men” today know how to sever God’s commands from those of men. Incredibly this is the tragedy of our time as original Protestant churches drift either toward Holy Tradition or Regulativism for the wellspring of their worship. The loss of adiaphora by magisterial Protestants not only endangers the rationale for Prayer Book, but it represents an overall weakening of principles behind 16th century reform, be it Germany or England (where adiaphora was confessional). Without adiaphora, justification-by-faith cannot be properly applied to worship (separating rites which remit sin from those that do not, perhaps exciting faith only). At root is the inability to distinguish kinds of laws, and this is a great offense. Hooker, like Cranmer before, comments about this confusion of law in Book V of Ecclesiastical Polity, poignantly saying,

“Now, to endeavour by any argument to make that seem divine, which is not so; or, vice versa, to make that not to seem so, which is, must be accounted a heinous sin.”

This entry was posted in RPW, St. Louis Affirmation. Bookmark the permalink.